A recipe adopted from Ted Saucier's 1951 publication "Bottom's Up", as it appears in  "The Big Bartenders Manual" by Masson & Boehm. 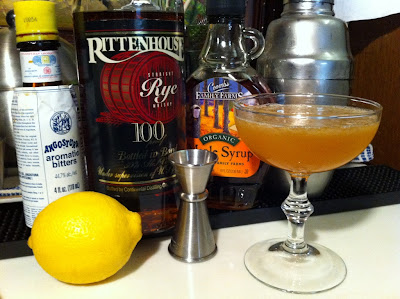 The Habitant
This Canadian cocktail is credited to "Larry Dennis, Seignory Club, The Log Chateau, Quebec"
"The Seigniory Club"
The exclusive private retreat of the "Seigniory Club" took its name from the French land grant system. "Seigniory" is the anglicized version of the French seigneurie.  The club was only open to an elite membership for its first 40 years of operation. Among Canadian members during this period was former Canadian Prime Minister Lester B. Pearson; and non-Canadian members included Queen Juliana of the Netherlands, Prince Ranier and Princess Grace of Monaco. Among the many titled visitors was the Prince of Wales who revisited when he became the Duke of Windsor.
"Habitant" is a word originally used in the early years of "New France" to designate any French colonists permanently resident in Canada.

I  heard about this one recently from a friend, and I was curious to find out if maple syrup was better in a cocktail than it sounded.
It did sound odd, but I had just read that drinks sweetened with maple syrup would be among the "Top 11 trends of 2011" in a recent blog by Kara Newman, so I was curious.
The Habitant is a seductively good cocktail. The spicy rye and sour lemon notes are here, and in good balance with the sweet to make it an excellent "sour" cocktail. Using maple syrup and Angostura bitters to provide that balance, this becomes a complex and warming libation.
The maple flavors fall way back and are hard to pin down, yet still there. I love the way this one stays with you too, like a warming fire in your belly. It's easy to imagine this being a favorite in any crowd, let alone the uber elite and exclusive group credited here. 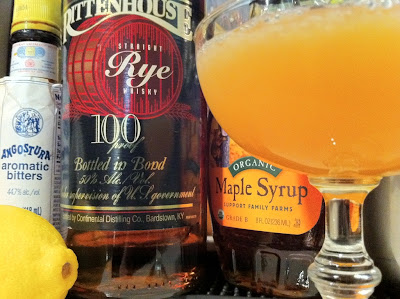 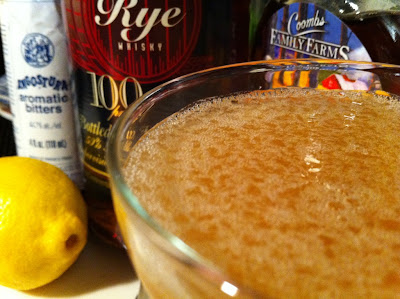 Posted by Boulder Libation at 6:15 PM