The Daiquiri, Drink #4 of my "Embury six" series.


THE DAIQUIRI
This is a rum drink. I believe that it is the rum drink. It's certainly a fantastic benchmark recipe to judge a rum by. The daiquiri is also perhaps my favorite of the six drinks that Embury lists as "the six basics that everyone should know how to make".

With the simple ingredients of rum, lime juice and sugar, come an amazing array of flavors based on the rum used. Certainly there is some play in flavor with the sugar used, but this drink is really all about the base spirit...rum.

Give an educated bar tender a new bottle of rum to try. Chances are, the first thing that they will do is whip up a daiquiri to see how the rum works in a cocktail. 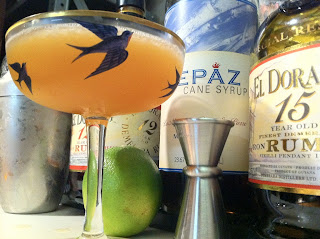 Where did this cocktail come from? Like most of the drinks in this series, it has undergone many drastic changes over the years which have lead to it's near complete downfall. The good news is that the daiquiri is slowly and steadily making a comeback in it's original form.

A popular story that ran in the Miami Herald in 1937, says that Jennings Cox invented the drink known as the daiquiri in the late 1800's. Cox was an American expatriate that worked for the Spanish-American Iron Company, situated near the village of Daiquiri about 4 miles east of Santiago de Cuba.

The story goes that Cox ran out of gin while entertaining American guests. Unsure about serving local rum straight up, Cox added lime juice and sugar to improve the rum’s taste.

There's evidence that the drink had been popular in Cuba for some time by then so this claim is often disputed. Maybe Cox had a house servent that "helped" him with the recipe?

It's also very close to the Navy grog recipe from the late 1700's, which is most likely the original inspiration for the daiquiri.

What does seem to be an accepted fact is that the drink stayed in Cuba until 1909, when Admiral Lucius W. Johnson, a US Navy medical officer, tried Cox’s drink. Johnson subsequently introduced it to the Army and Navy Club in Washington, D.C. and popularity of the daiquiri increased over the space of a few decades. 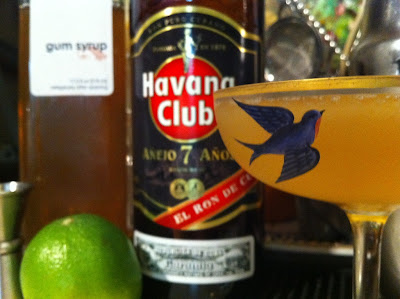 The Daiquiri and the Bacardi Cocktail

The photo below, is a full page ad taken out in the January, 1915 edition of "Our Navy", which was dedicated to describing Cuba's importance as a naval stronghold for the US at the time.

It lists the recipe for a Daiquiri that is more or less the same as the modern version.


In 1936, Barcardi sought and was granted "An injunction prohibiting the Barbizon-Plaza Hotel and the Wivel Restaurant in West Fifty-fourth Street, from serving Bacardi cocktails containing other than the rum manufactured by the Compania Ron Bacardi,was issued yesterday by Supreme Court Justice John L. Walsh."

I believe that this makes the "Barcardi Cocktail" the oldest trademarked drink in the world.

When the case was tried in 1936, the prosecutors brought in top bar men from around the world, to testify to the fact that no respecting bar man would serve a Bacardi cocktail using any other rum. At this time, the recipe was still the same as that listed in the advertisment from 1915.

Eventually, the simple syrup or sugar in the Bacardi Cocktail was replaced with grenadine. The same drink now, with a non-Bacardi rum is called a "Daiquiri Grenadine" or a "Pink Daiquiri".

Hugo Ennslin's 1916 release "Recipes for Mixed Drinks" is considered the earliest cocktail book to include the daiquiri . His recipe called for:

Shake well in a mixing glass with cracked ice, strain and serve.

There was an earlier recipe worth noting however. Mostly likly written in late 1912 and published in 1914, the book "Drinks" by Staub included this recipe. It was described by Wondrich in "Imbibe" as "garbled", which is quite fitting. Note the reversed proportions of the lime juice and rum.

Daiguiri Cocktail (not a typo)

Shake well in fine ice; strain into a cocktail glass. 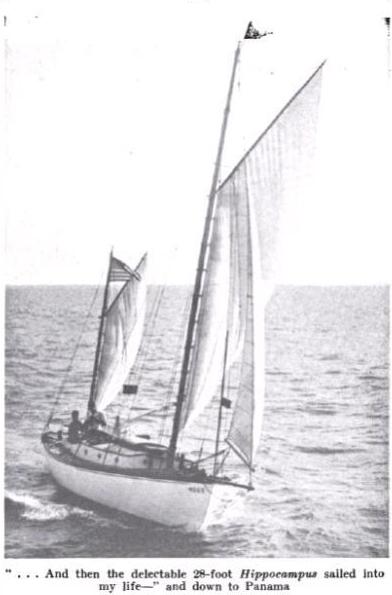 The following is an excerpt from "Cruise of the Hippocampus". It was published in 1922, and written by Alfred Loomis, who took his 28 foot sailboat down to Panama and wrote of his adventures. When stopping in Havana he wrote:

Dodging the terrible Fordingos (as Cubans term the familiar Ford, which, all decked out in gorgeous upholstery, taxies in great numbers along Havana's congested thoroughfares) we next strolled about looking for a restaurant.

When we had found one that seemed commensurate both with our fastidiousness and the leanness of our pocketbooks, we entered, sat down before a clean white tablecloth, and ordered a meal which ineluded Spanish omelet and an ice-cream flavored with the delicious tropical fruit mamey.

All of this, which is long-winded in the telling, but was longer in the happening, we did before— We ordered a round of daiquiris.

A daiquiri, be it known, comes to the table in a cool, dewy glass of the type used at home in the ancient, unregenerate heyday of the cocktail. In color it may be a delicate shade of green or it may be the hue of claret. But it contains no such vinous admixture, being composed of lime, sugar, and the finest Bacardi rum.

It was my treat, in expiation of the old sin of making an atrocious landfall at Charleston, South Carolina, and we drank to happy days. Were I a doctor I would universally prescribe daiquiris for parched throats and arid dispositions.

I think this sums up the general experience travellers to Cuba had around the early twentieth century. (I would also agree wholeheartedly that a daiquiri could be universally prescribed for parched throats and arid dispositions!)

So what about that frozen daiquiri? That has to be an abomination from the 70's right? Not exactly.
In 1914, a Catalan immigrant by the name of Constantino Ribalaigua Vert started working in the bar, as cantinero (bartender). Constantino, nicknamed Constante, became the owner in 1918. He is credited for inventing the frozen daiquiri in the early 1930s, a drink that became linked to the fame of the place and is still known as the "El Floridita".

One of Constantino's most famous patrons was Earnest Hemingway. The "Papa Doble" and the "Hemingway Special" are popular frozen variations on the drink that originated in the El Foridita. These drinks have their own convoluted history which is long enough to warrant a new post entirely.

What's not in question is that rather than shake the drink, Constantino mixed them in "an electric mixer over shaved ice, whirled vigorously and served foaming in large goblets.” This according to a 1948 report from A.E. Hotchner who went to "drink innumerable Papa Dobles at the Floridita, with the great man himself", and paid attention to what Constante was doing.

Hemingway himself was known to describe a well made daiquiri's texture as looking “like the sea where the wave falls away from the bow of a ship when she is doing thirty knots.”

So, as long as you are using fresh ingredients with good proportions, a frozen daiquiri has historical roots and deserves to be called a legitimate cocktail.﻿
﻿

What really pushed the daiquiri into the spotlight in the US, was wartime rationing in the 40's which made whiskey, gin, etc. hard to come by.

Because of Roosevelt's Good Neighbor policy, which opened up trade and travel relations with Latin America, Cuba and the Caribbean, rum was easily obtainable.

The Good Neighbor Policy, which was also known as 'The Pan-American program" also helped make Latin America seem fashionable. Rum-based drinks had been commonly frowned upon as being the domain of sailors and those down on their luck. Now they were all the rage, and the daiquiri saw a precipitous rise in popularity.

The drink did not survive the cocktail dark ages well. It emerged as a sickly sweet & syrupy mess, in all manner of exotic flavors using flavored schnapps and the like.

The reputation of the daiquiri has fallen as a result. As recently as a year ago, when asking bartenders for a daiquiri - even in "reputable" establishments - I have received the response "We don't do daiquiris here".

My response to which has always been, "of course you can". Do you have rum? limes? simple syrup? Then you're aces mack.

Now I'm starting to hear the response, "Oh, I meant we don't do frozen daiquiris."...its a start.

Before I get into the new modern version, let's check in with our good friend Mr. Embury. 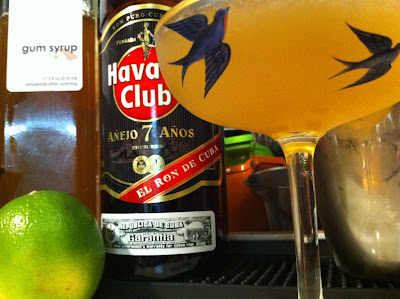 Embury on the Daiquiri
David said that:

"The original and correct recipe for the Daiquiri is stated in terms of a single cocktail as 1/2 teaspoonful of sugar, juice of half a lime, and 1 jiggerful of white label rum. This is a difficult (to)t improve upon. It is dry, yet smooth. The reaction time is short. The lime and rum blend perfectly. The Daiquiri, like the Old-Fashioned, deserves an even greater popularity than it now enjoys."

He goes on to say that in his opinion, the Daiquiri is vastly superior to the Manhattan. He points out that most bars sell more Manhattans than Daiquiris blaming it on inferior rums and use of improper proportions. However his proportions do make for an extra-dry variation. Lastly, a word on simple syrup and rum drinks.
When using a light rum like an El Dorado 3 or Flor de Cana 4, I prefer the clean and crisp taste provided by a regular simple syrup made with processed (white) sugar.

If making your simple syrup at home, use white sugar in a 1:1 ratio to make your syrup to use with these (light) rums.
You can use pretty much any rum you want, with the spiced and black strap rums being the possible exceptions.
If you are going with a darker rum, then try a syrup made with a darker (rawer) sugar. The petite canne sugar cane syrup goes especially well with darker rums, like the El Dorado 15 or even a Havana 7.

If making a syrup at home to mix with these rums, go with a 2:1 sugar to water ratio and use a turbinado or demerara sugar.
﻿Enjoy a Daiquiri.


Posted by Boulder Libation at 7:44 PM