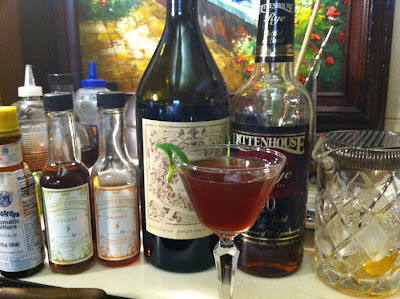 Here's another recipe from Straub's 1914 book "Drinks". When I came across the "Fourth Regiment Cocktail" browsing this book, it sounded familiar.

I did a little digging and found that this has become a popular drink with many of today's top bartenders. It's shown up on many high profile cocktail menu's from coast to coast, and for good reason. It's a very good recipe!

Other recipes for the fourth regiment specify rye whiskey, so I went with the Rittenhouse bonded 100-proof straight rye whisky, which always pairs well with the antica vermouth.

I thought about using "Punt E Mes" for the vermouth, but did not want the quinine flavors here. With all the bitters used in the recipe, I opted for the "Carpano Antica" instead for it's rounder, sweeter, and more herbaceous qualities.

To be honest, I do prefer the antica formula in most drinks that call for aged spirits. It's not for every recipe, every once and a while it surprises me and just does not work. For those drinks the "Punt E Mes" usually makes the perfect alternative.

I used Angostura bitters along with Scrappy's Orange and Celery bitters. I think the real success of this drink, is that it calls for "Celery Bitters".

These bitters are a rarely used in the old books, and have been recently resurrected by many different manufacturers. Since this is one of the few cocktail recipes that call for celery bitters, and that actually sounds good, I can see why it was latched onto.

This drink is commonly attributed to a 1931, though Robert Hess (Drinkboy.com) dates it to 1889. The recipe below is from 1914 and calls for lemon peel and Angostura bitters. Earlier versions are said to call for Peychaud's bitters and lime.

Normally I'd say that since Jacques told you to stir when he wanted you to stir, and since this one says shake, that you should go ahead and shake away. I did shake this one first time out and it was good, but I really didn't get any of the flavors from the bitters.


So I reverted to the more common instructions for these ingredients and stirred. Now here's a drink worth writing about! The celery bitters came out but did not overpower (as they easily do) rather, they provide a nice earthy, savory note. The 1:1 ratio of rye to vermouth is really sweet compared to a Manhattan, but the bitters and citrus oils balance that sweetness nicely.

To get that citrus oil balance, squeeze a lemon peel into the mixing glass over the other ingredients, drop it in and stir well. Then add lime peel for the garnish. 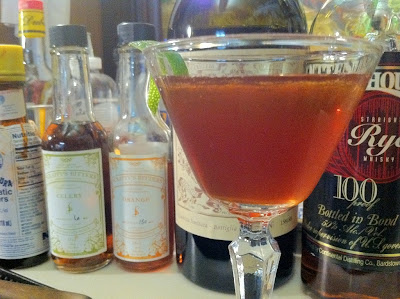 Posted by Boulder Libation at 9:36 PM