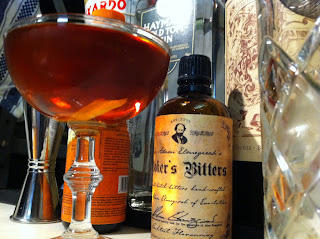 THE MARTINEZ
The Martinez is one of the oldest cocktails on record. It predates the Martini's first mention in print by at least 4 years and for some time the two names appear to have been interchangeable for the same drink.

The Martinez didn't make Jerry Thomas's 1862 publication. A close recipe by the name "gin cocktail" was included, and apparently re-named the Martinez by the time the expanded version appeared in 1887.

In 1884, it made it's first appearance in under the Martinez moniker in "The Modern Bartender's Guide", 3 years before Thomas's recipe.

The most widely circulated rumour, is that it was first made by Jerry Thomas around 1870 at the "Occidental" hotel for a miner that was on his way to Martinez, CA. There are well documented reasons to doubt this story.

The good people in Martinez claim it was first made in 1849 for a miner that had struck gold. In 1965 there was a story submitted by Mrs. Nina MacLeod Ritch of Martinez, CA to a columnist called "The Knave".

Mrs. Ritch relayed details given to her by a former fire chief of Martinez, a Mr. John M. ("Toddy") Briones who at the time was ninety-one. According to Toddy, his brother-in-law, Julio Richelieu, from Julio's Bar on Ferry Street, was the inventor. As the story goes, apparently a miner on his way to San Francisco, stopped in at Julio's for a drink and paid for it with a gold nugget. Rather than asking for change, he asked for something special and Julio mixed him up the first Martinez cocktail.

Nice story, but apparently there is no record of a Julio Richelieu of ever having lived in Martinez at the time and no record of a Julio's Bar. There was a Richelieu Cafe, but it does not appear until 1893, which is nine years after the recipe appears for the first time in print. Without supporting historical documents, which to date have not surfaced, this theory is also suspect.

A little history explored, now what about the recipe?

The old timers made this drink with a ratio of 2 parts vermouth to 1 part gin. Starting with...

The 1884 version from Byron lists the Martinez as:

"Same as Manhattan, only you substitute gin for whisky."

There are 2 Manhattan recipes and the Martinez seems to have ended up as a combination of both. 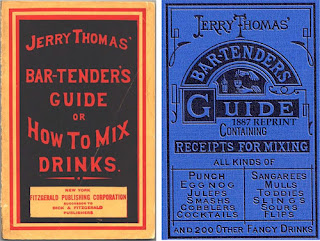 The 1887 posthumous release of the expanded version of Jerry Thomas's Bartender's guide shows:

Shake up thoroughly, and strain into a large cocktail glass. Put a quarter of a slice of lemon in the glass and serve. If the guest prefers very sweet, add two dashes of gum syrup.


Erik Ellestead published a version on his Savoy blog reversing the ratio to 2 parts gin to 1 part vermouth.

Jaimie Boudreau is accredited with a 1:1 ratio recipe.

There's also a great video of The Dorchester's Giuliano Morandin making their special version using house made old tom gin and bokers bitters that calls for 1.5:1 (1.5 parts vermouth to 1 part old tom gin) which after trying several variations I tend to prefer.

Modern interpretations call for this drink to be stirred rather than shaken. Giuliano shakes his Martinez as suggested in the original Jerry Thomas recipe. Given the ingredients, the modern practice of stirring makes the most sense.

I'm going to put forth this version based on my own preferences and experimenting. 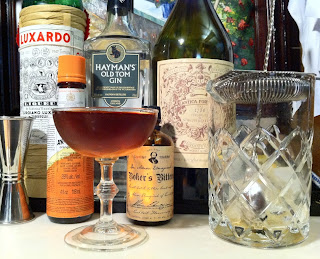 As a final note I'll go with the good prof and say that "If the guest prefers very sweet, add two dashes of gum syrup."

What's your favorite version?
Posted by Boulder Libation at 6:07 PM