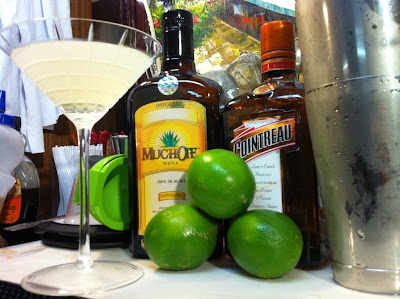 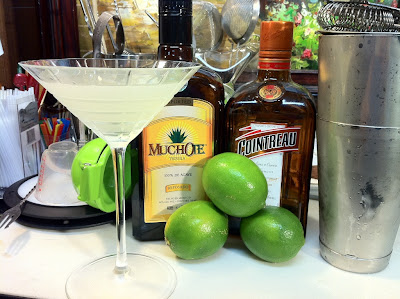 
Shake well and strain into a cocktail glass.

As simple and tasty as this is, you may want to make two. A Picador is one of a pair after-all, (a "Picador" is one of the two horsemen that spear the bull in a Spanish bullfight with a lance.).

Can't decide between lemon or lime? Try one of each! 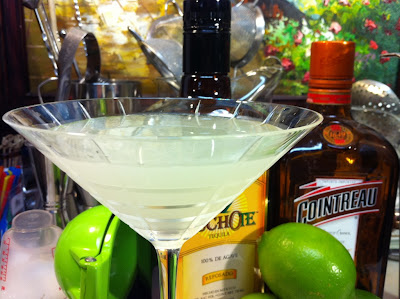 Posted by Boulder Libation at 5:33 PM 6 comments: Links to this post 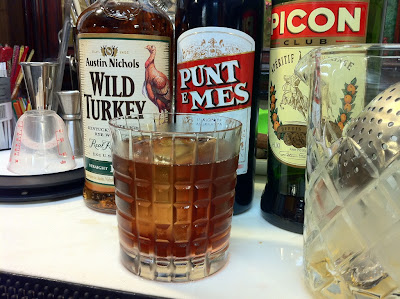 Appearing in the Old Waldorf Bar Days book (1931) and attributed to Mike Monahan, this is basically a Manhattan with Amer Picon substituted for Angostura bitters. 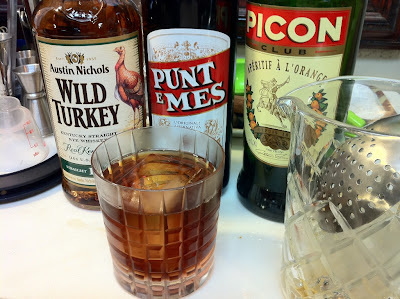 
Stir with ice and strain over a fresh cube in a whiskey glass.

Just as with the Manhattan, rye is the whiskey to use here, as rye whiskey was the most prevalent and readily available in the New York Region at the time these drinks were brought about.

The Amer Picon of the day was much stronger, so upping from a few dashes to a tsp to allow the flavor to come through is not a stretch.

Wild Turkey and Punt e Mes always work well together in my opinion, and the addition the Amer Picon, gives an extra herbal hint along with the obvious orange flavor the Picon imparts. (If you cannot get Amer Picon in your market, try Amaro Cio Ciaro as a reasonable substitute - maybe add an orange twist as well). A very nice drink Mr. Monahan. 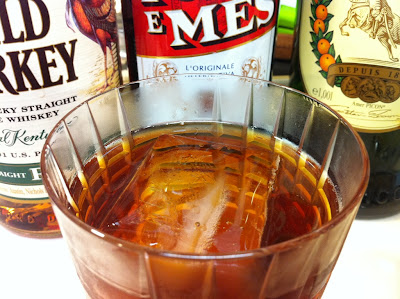 Posted by Boulder Libation at 8:20 PM No comments: Links to this post 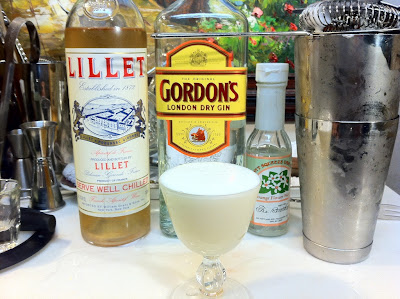 
Shake well in a mixing glass with cracked ice, strain into a small stem glass and serve.


A refreshing summer way to enjoy your vermouth and gin. Great name for this drink, and apt too.

The fluffy egg and thick, wet Lillet combine for a texture that is velvety and soft like a kiss. It is slightly sour and very vermouth forward, even with the soft Lillet.

Be careful not to use too much orange flower water. It should be the salt in your soup. A little goes a long way to bring out the flavors already there. Just as with bitters, if you can taste it, you have used too much. 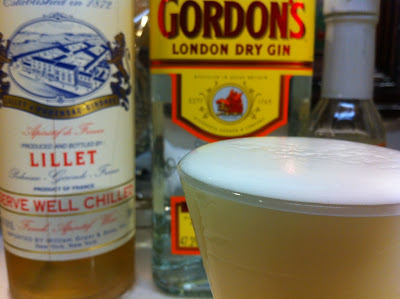 Posted by Boulder Libation at 7:24 PM No comments: Links to this post 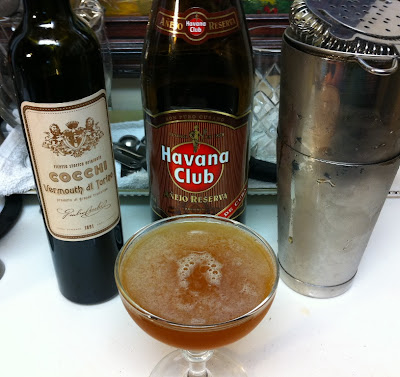 I had originally thought it a fairly safe assumption that "Rin of I lime" was a mistake in the printing, and that the intent was "juice of 1 lime" - Thanks to Frederic over at Cocktail virgin slut, I did some extra digging and found that Ensslin does indeed instruct in the use of the rind of a lime, specifically in his recipe for the Jack Rose:

I have revised this entry accordingly.


Shake well with cracked ice and strain into a cocktail glass.

You'll want a good aged rum with lots of character, but nothing as thick and dark as say an El Dorado 15 or as full hogo as a Smith & Cross. What you will want is a "Planter's Best"( for those of you familiar with Wondrich's rum descriptions in his book "Punch".)

In the absence of a good aged Havana Club rum, go with one of the aged Flor de Cana rums like the Grand Reserva 7 or the Centenario 12.

I'm really enjoying my new bottle of Cocchi Vermouth di Torino which is why I'm using it here. Carpano Antica should do nicely here too.

So...revised drink, revised tasting notes. Shaking this drink nice and hard to really infuse the mix with the lime, and double straining, I ended up with (not surprisingly) a very different drink. Much more of a "limey Palmetto".

Lime then rum taking front seat on the nose, followed by very subtle hints of the vermouth. The drink is light and fresh on the palate. Now the rum and vermouth play better together providing a very enjoyable "Manhattan" like experience.

The essence of lime provided by shaking with the rind gives a very nice, fresh citrus profile, and without the full sour of my earlier drink (where I used the juice of 1 lime). It is spot on actually, and now I have something to do with some of those used lime rinds! I'll be playing with this technique for sure.

Thanks again Frederic for the comments! 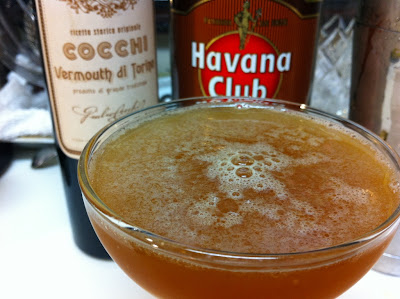 Posted by Boulder Libation at 8:14 PM 6 comments: Links to this post 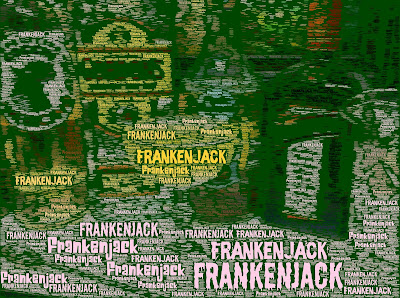 Here's How!, published in 1927, is a title known to collectors for the many recipes that were copied verbatim into the 1930 Savoy cocktail book. Harry Craddock and the book's editors also borrowed from McElhone, Ensslin and Vermeire among others, which puts the book in good company.

Judge Jr. was the nomes de plume of one Norman Hume Anthony, who spent quite a bit of time in Frank & Jack's according to an article from TIME magazine from June 19,1939.

Apparently, Norman was still the editor of the Judge in 1927 when Here's How was published...he was fired in 1930 though and spent "several months biting his nails" in Frank & Jack's speakeasy.

Eventually he was hired by Publisher John Delacorte to start the very successful "Ballyhoo" publication, described as a "bathroom burlesque of bathroom advertising".

The "Frankenjack" cocktail was among the recipes first published in this book, and as it states in the notes, was named after the proprietors of a "very, very" well-known speakeasy in New York City.

A famous Frank and Jack's speakeasy, which I think we can safely assume is the same establishment, was described in Michael Batterberry's “On the Town in New York” as follows:

More typical was Frank and Jack’s, a jolly place where there were generally a hundred people jammed into a tiny kitchen barely large enough to hold three tables. Among those struggling for air and room enough to laugh might be Jimmy Durante, Pat Rooney, or Peggy Hopkins Joyce. It was Frank and Jack who perfected the gambit of getting rid of one drunk by asking him to assist another out the door. 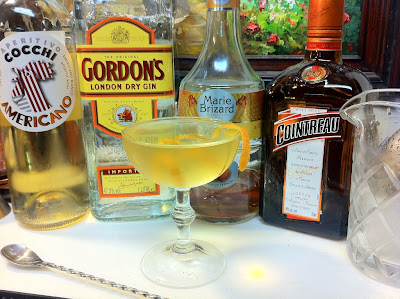 THE FRANKENJACK
1 ounce (30 ml) Gordon's Export gin (or Beefeater)
1 ounce (30 ml) French Vermouth (I used my fav Kina Lillet sub, Cocchi Americano)
1/2 ounce (15 ml) apricot brandy (Marie Brizard "Apry")
1/2 ounce (15 ml) Cointreau
Stir well with ice and strain into a cocktail glass. Garnish with an orange twist.
Over the years many recipes have called for this to be a shaken drink. With the absence of citrus however this drink is much better suited to being well stirred.
This drink is basically a Claridge cocktail (sans the chocolate powder dusting) from Harry McElhone's 1922 ABC of Mixing Cocktails. The Frankenjack sounds like something you'd actually order at a bar though, and made for a good story here.
It's a nice drink. Too fruity to be a martini, though that is obviously the base drink here. I suppose if they'd named this 60 years later it would be a "Aprytini" or something "clever" like that.
The Apry is certainly the dominate flavor, with the Cointreau's orange playing a supporting role only.
Using the Cocchi Americano over a regular dry vermouth gives the drink a nice roundness and silky mouth feel putting this drink more on the sweet side.
The 47.3% A.B.V. Gordon's Export does a great job of making sure things don't get too sweet, use a good quality, high proof gin for this one for sure. 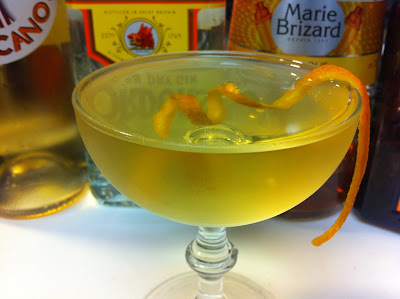