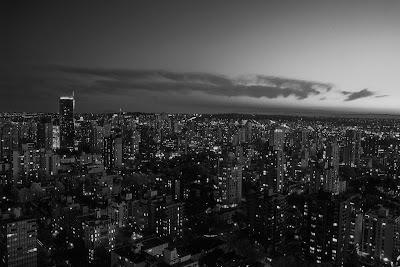 I had a great time checking out new places in NYC last week. Toy Fair, Fashion Week, and bevy of all-new places to try out, it all made for an extra good time!

First stop was booker and dax which is located adjacent to momofuku ssam bar in milk bar's old location (milk bar moved to a new space directly across 13th street).

Momofuku restaurant group owner David Chang and molecular gastronomy wizard Dave Arnold put this program together and I have to say, they are off to a great start!

For a "molecular" program, the cocktails were remarkably normal in their presentation. The familiar enough menu headings on the right hand side of their current cocktail menu read "Stirred", "Shaken", "On the Rock"...


The first column is the unusual bit. "Bubbles" which are house-prepared, pre-mixed and bottled-cocktails which are then hand carbonated on-demand.

Because they carbonate the entire cocktail, rather than adding a carbonated beverage to the mix, the mouth-feel on the carbonation is unusual. Big, round bubbles that feel like pop-rocks going off in your mouth. Well, almost like pop-rocks!

It was my first cocktail of the trip so I started with the Manhattan. It was a very solid classic served in a small coupe with enough extra liquid to fill the glass about half again served in a small glass bottle on the side.

It was served very cold mind you, the glasses are chilled using liquid nitrogen! It was very refreshing and absolutely hit the spot after a long day of travel. 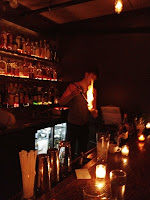 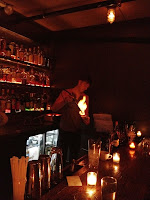 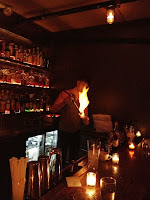 A main attraction here is certainly the "Red Hot Poker" which is especially fitting for their winter launch. The poker was created by Dave Arnold and reaches temperatures around 1500°. Like the red hot pokers used in colonial days to make hot rum flips and their ilk, the poker is heated (electronically) to the point where the tip is glowing red hot. It rests on the bar off to the side in a protective cradle.

When the poker is used to heat up one of these drinks, flames shoot up as high as two feet above the glass creating an entertaining light show. This is more than just a gimmick though, it's a serious tool. OK, granted it should not take long for the "Flaming Moe" jokes to start, but the resulting concoctions made me a believer!

We tried the "'N' Cider", "Friend of the Devil" and the "French Colombian" this visit.

The 'N' Cider is a classic winter warmer. The flaming process tamed the normally hot and hard-to-tame Laird's bonded down quite a bit. The softened apple whisky combined with the lemon, cider and cinnamon made for an exceptionally good toddy.


The hot Campari in the Friend of the Devil was a new one for the group and we all agreed it changed the flavor quite a bit. The touch of pernod seemed just right. It was a bit all over the place on the palate, sharp and smooth, bitter and just a touch sweet. Unusual and enjoyable.

The French Colombian is for Pernod lovers! I've never really liked "good and plentys" but this was good enough that even I enjoyed the result. Bottom line with these drinks, the menu's description of "old-school flavors, burnt and caramelized, served hot..." is dead on.

We also tried a Bols Deep. Bols Genever based old fashioned's are gaining popularity for good reason, they are delicious! The Bols Deep was no exception. Keep an eye out for these drinks this year!

With a rotovap on the back bar by the till, you know this program is seriously geeky, but it is not geeky to the point of distraction. Like all of David Chang's endeavors, Booker and Dax provides an experience that is comfortable and familiar, while providing something that somehow feels completely new at the same time.

Thanks again to Tristan and the crew for making us feel welcome and taking such good care of us, we had a great round of drinks!


On the way to dinner the next evening at Hudson Clearwater I stopped in at Employee's Only for a quick drink. (...and it was so good I had to stop in for another one after dinner!)

The address alone will only get you part of the way there. Following the unmarked-door trend prevalent in modern speakeasies, this location is marked only by the "EO" logo in the middle of the green awning in the photo above. It wasn't immediately obvious to me that I'd arrived at my destination and I had to ask the doorman if I was in the right place. He affirmed I was and invited me in.

Inside, just past the psychic working a small table with tarot cards, is an art deco gem. Tasteful glitz, just a tad faded, it really felt like a swank 20's speakeasy. 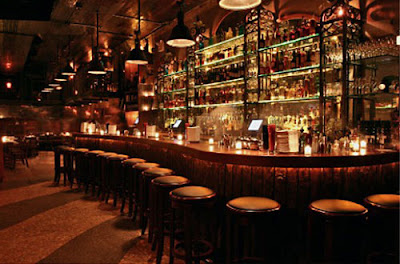 I was there on a Wednesday night at a little after 6 and I was one of 3 people sitting at the bar. Milos Zica was behind the stick and made me a Malèna cocktail, a mixture of, well...here's the menu, you can find it towards the middle of the first column: 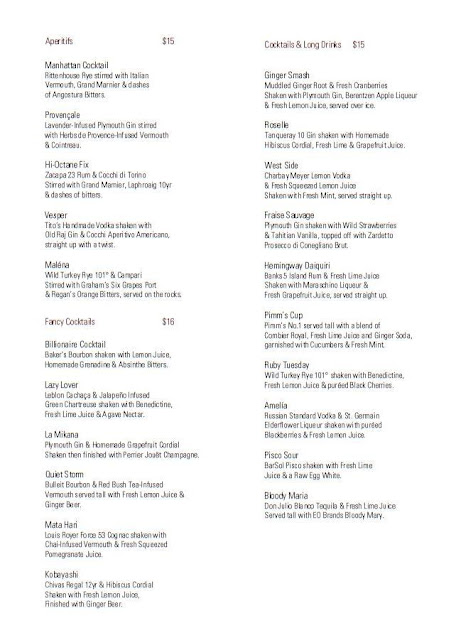 So the Malèna, my favorite rye, with Campari and they throw in a little high-end port and orange bitters - a very nice cocktail. I tried not to drink this concoction too fast as I waited for my companions to arrive for dinner, which was not an easy task! I was able to watch Milos give instructions to the barbacks for the busy evening ahead and even sampled a few variations on a drink he was developing.

Arriving early anywhere is a good call if you want to get to know a place. The staff has so much more time to spend with you before the crowd arrives and starts pushing them to their limits. Milos was the perfect host and even though I only had time for one, it was very enjoyable and I was made to feel extremely welcome.

When I returned 4 hours later after a tasty (and reasonably priced!) meal at the Hudson Clearwater (if you go, try the Kings County which is a mixture of Rye, Chartreuse, Carpano Antica, Ango and Orange Bitters w/orange twist)...ok, here - check it out, it is worth locating and enjoying! http://www.hudsonclearwater.com/ (212-989-3255)

Several hours later after the big meal, we returned and Milos immediately recognized me and helped us find a few seats at the bar. It was late and we only had time for one, but I had as good a Pisco Sour as I have had anywhere and I was also able to sample their "Ruby Tuesday" (which was also very good). Before hitting the bricks we shared a round of Fernet with the staff.

The trip to "EO" was very enjoyable and I would not hesitate to return.

We arrived around 6:30 on a Thursday night at this neighborhood favorite and it was already starting to fill up. It took about a quarter of an hour to jockey a few seats at the bar. Once there we ordered some light plates and cocktails. Bar manager Chaim Dauermann was behind the stick and promptly whipped us up a couple of great cocktails.

The pasta dishes hit the spot, I ordered the linguine w/mussels, cherry tomatoes, garlic and wine and it was excellent, and this is a favorite dish of mine! The cherry tomatoes were on the large side and had their skins blanched off, they a nice meaty texture and a great flavor. There were pleanty of mussels in the mix and not too much butter in the sauce. Kudos to Chef Eric Kleinman for really getting this dish right!

I ordered the Vieux Carre. Shaim put together the Rittenhouse rye, Hine H Cognac, Dolin Rouge, Benedictine (along with Ango and Peychaud's bitters).

I soon received the expertly prepared classic cocktail which tasted every bit as good as it looked. Soon the place was really filling up and we had places to go, so after the quick bite and libations we were ready to move on.

Thanks again to Shaim and the crew for a great experience. I'll be back! 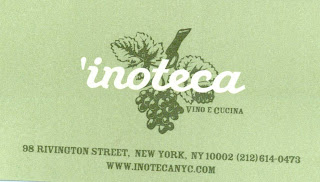 ACME
We hiked it over to Acme next and were greeted inside by a rather rude couple who immediately informed us that there was a private party that night. It's worth saying that there was nothing on their web site and nothing on front of building noting this. A friend I was with told me that this was the second time that he had tried to visit this place, and the same thing happened to him the first time. I really doubt I'll be back to try again.

This did give us a chance to hike a little further on to Viktor & Spoils...which turned out to be well worth the walk in the rain.

We looked at the entrance from across the street for a few extra beats before we figured out we had arrived. The doorman was my first clue! 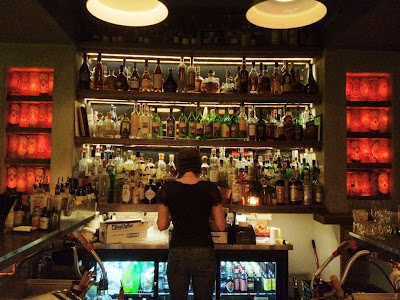 The bar is flanked by flickering candles, each candle masked with a gruesome skull. Good mojo! This place has a great vibe. Check out the wall of mezcal and tequila, I was impressed!

I started with a favorite, "La Vida Buena". A tasty mix of Vida Mezcal, Aperol, Carpano Antica, Orange Bitters, Orange Peel stirred and served up. Perfect after trekking so far west. I remember feeling quite glad at that point that Acme had been closed! 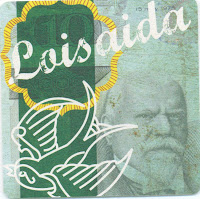 We also had very good margaritas (though don't ask for a "Tommy's" here) and later, a round of mezcal (served in small terracotta saucers) with Leo DeGroff, the son of cocktail legend Dale DeGroff, who has teamed up with Andy Seymour and Steve Olson (AKA Wine Geek), to put a super solid tequila and mezcal based cocktail program together here. Here's a copy of their menu for your viewing:

This was another spot I would love to come back to. I didn't get to try their food this visit, but what I saw come out of the kitchen looked tasty!

Last on this trip was actually the same place where I ended my first night in the city, a place where you should end your night at least once in the near future. Where the drinks kept coming one better than the last. A place I got happily trashed at twice, it was so nice. A place called Mother's Ruin.

This place was great. Laid back, divey but still kinda nice, a little old world charm in the ceilings. Funky bathroom. Nice long bar with enough people working to take care of the crowd. An industry hang-out to be sure, but everyone who is there is there simply to have a great time. 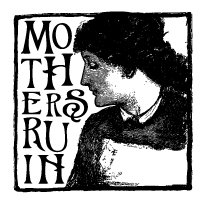 I showed up on Monday night (after some excellent German fare at Weschler's - Currywurst and   Köstritzer , what a treat). It was not too early, maybe 9:00 and we were the only ones there!

So we had G (Giuseppe Gonzales) to ourselves for close to an hour before things really picked up. This is certainly unusual, but it was the night before Valentine's Day and a Monday to boot...it turned out to be our good luck! I remember having a great time, being served some delicious laird's bonded based drinks, and hearing some great stories from G, but not much else to be honest.

When you find a place that was that much fun, it's hard not to return quickly! So my last night before heading home I found myself back at Mother's for "one or two". Again, I was treated to a great number of unknown drinks along with the attentions of some amazing bartenders - and again, that's about all I remember. This staff knows their stuff and how to have a great time with the crowd. It is a perfect place to end an evening out, and a perfect place to end this post. Cheers! 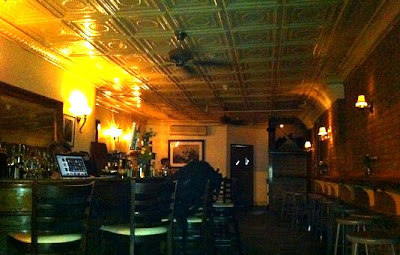