THE SUNTORY SOUR
I first became interested in putting this drink together after reading David Broom's new book "The World Atlas of Whisky" ﻿where I learned more about the Suntory company and Japanese whisky making in general. I decided maybe Midori deserved a second look and started plotting the Suntory Sour.
Easier said than done though as Midori is a rather challenging liqueur to balance. After many attempts with varied success I've settled on the following recipe which I think captures the character of a whisky sour and allows the Midori to play a role without proving too overpowering or cloying. I hope you enjoy it as much as I do! 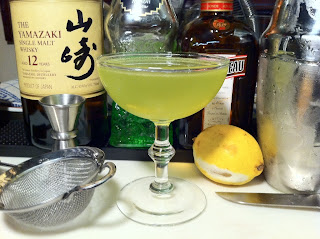 (This would also make a great highball.)
Posted by Boulder Libation at 3:25 PM