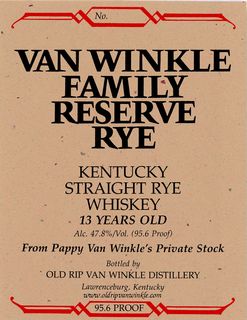 When talking to Eben Freeman last February in Fatty Johnson's about the merits of the Van Winkle family of bourbons, he asked me if I had tried the Van Winkle 13 rye. He said it was the most amazing rye he had tried and worth getting, if one could locate a bottle. I had not heard of it, but from that point on I was determined to  find a bottle.

Availability turned out to be scarce indeed. Lots of online retailers claim to carry, all saying "out of stock" at this point. A few will let you "pre-order" 4-6 months out with a one bottle limit.

It makes sense, the demand for high quality tipple, especially rye, is huge right now. 13 years ago the current resurgence of ryes popularity could hardly have been anticipated.


I had to jump the pond and pay through the nose to acquire my bottle. When I came across one in Gerry's wine shop in London's Soho district, I eagerly shelled out the £69 asking price, the long hunt finally having come to an end.

All of the Van Winkle products are wheat formula bourbons with the exception of the Van Winkle Family Reserve Rye Whiskey. Most rye whiskeys are aged around four years. Van Winkle has aged this expression an astounding 13 years. (They even offer a 15yo!)

TASTING NOTES:
I have several bottles lined up that I'd like to post reviews on. How to score spirits on my blog posed a bit of a challenge. Should I use the point system? Starred reviews? A school-like grading scale of A-F?
In the end, I decided I would provide my tasting notes and include any judgments as to a spirits worthiness for recommendation in the final a summary. I will provide notes on the nose, palate, finish and balance as well as a summary describing my overall impressions on how a spirit may be best used (or not used).

There are shades of gray. To rank bottles according to my own standards seems a worthy effort for this forum. I looked around and decided that a 25 x 4 scoring system seemed to best suit me. So each of these four categories will be worth 25 points and I will assign each bottle a two-digit score.

It's also only fair that I recommend a recipe too, hope you enjoy the format.
Van Winkle Family Reserve Rye 13
Kentucky Straight Rye Whiskey
SCORE: 96 points

NOSE: Sweet with fruit, raisins, a little toffee and maybe a slight citrus note. Nice wood and spicy rye notes as well. Big and heady, possibly a hint of mint or menthol on the finish. As aromatic as a rye gets, 24/25.
PALATE: Oily, smooth and slippery in the mouth. Deep and big with flavors of fig, cherry, cooked fruit, at first until the nose kicks those big rye and wood flavors over the top. Rich, creamy, excellent balance. Considering its very high ABV of 47.8%, extremely smooth and drinkable. 24/25
FINISH: Medium long though stays on the tongue for a long time. Fruit flavors dissipating just slightly before the wood and rye spice. Warm, soft and bourbon-like in its sweetness. 22/25

BALANCE:  Amazing, absolutely in a class of its own. Though my expectations for this bottle were through the roof, I was amazed to find them satisfied if not exceeded. A benchmark rye in terms of taste, character and balance. As perfect a rye as I have ever come across. 24/25
Julian Van Winkle's masterpiece is probably best enjoyed neat. Since this is a cocktail blog though, let me recommend a way to enjoy this as a mixed drink. This rye really works well in the Sazarac, and my first taste of it was in a Sazarac made for me in the China Tang bar in London's Dorchester.
The Sazerac is one of American's oldest cocktails, and there is no dispute that this is a New Orleans based creation. I'm not sure I want to dig into full history of the Sazerac here to be frank, as it is a disputed and tangled story.
It most likely hails to around the 1850's and was originally made with cognac. Sometime around the phylloxera epidemic of the late 1800's when cognac became practically unobtainable, the switch to whiskey occurred.
Historians agree that early recipes calling for "whiskey" referred to rye whiskey, since rye was the prevalent whiskey of the time in the area.
In the early 1800's, Dr. Peychaud owned a popular drug store in New Orleans and created his special formula of aromatic bitters as a health tonic, at which time it was a popular addition to cognac.
You can possibly make a decent Sazerac without having true absinthe by substituting a little Absinte, Herbsaint, a mix of Pernod and green Chartreuse or the like and get decent results.
The histories of the Sazerac and Peychaud's bitters have become intertwined. If you do not have Peychaud's though, don't even try making this one. Luckily Peychaud's bitters are not that hard to find these days. 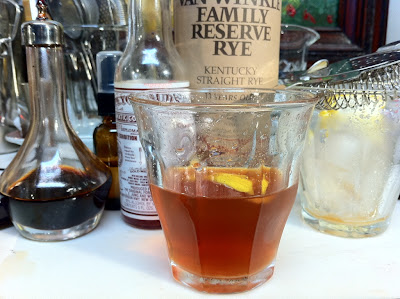 SAZERAC
INGREDIENTS:
2 1/2 ounces (75 ml) rye whiskey
1 sugar cube
2 dashes Peychaud's bitters
1 dash Angostura bitters (optional)
absinthe
lemon peel
INSTRUCTIONS:
Take two old fashioned glasses. Fill one with crushed ice and set aside. In the second glass, place the sugar cube in the bottom, dash the bitters onto the cube and muddle the cube well. Add the rye, and stir well. Add several small ice cubes and stir again. Dump out the ice from the first glass, rinse that glass with absinthe (or spray interior with atomizer) and strain drink from the second glass into the empty absinthe rinsed glass. Take a swath of lemon peel, squeeze over top and rub the rim of the glass - discard or drop into glass depending on preference. Enjoy!
The Sazerac is a classic among classics. A "secret handshake drink" among cocktail geeks. A New Orleans institution. All for good reason, it is an amazingly good way to showcase a great rye whiskey. Whether you go for the Sazerac 18 rye or the Van Winkle 13 or 15, it is hard to go wrong using the best bottle available for this recipe.
Rittenhouse bonded, Wild Turkey 101 rye or even the Sazerac 6 year rye will all make a good Sazerac.
Thanks to the Buffalo Trace group, we now have some amazing aged ryes on the market to make a great Sazerac with. How lucky are we, right? 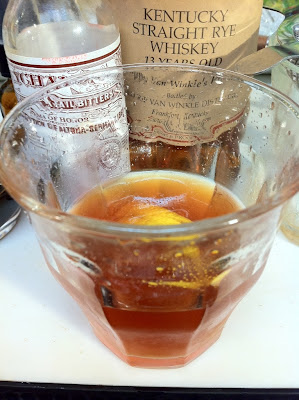 Posted by Boulder Libation at 6:29 PM