The Cherry in the Cocktail

The following article appeared in the May 15th, 1911 edition of The Mixer & Server,  an international trade publication for union bartenders, and which offers a story as to the origins of the "Maraschino Cherry".

THE CHERRY IN THE COCKTAIL.

Col. Neumeister, the Chicago millionaire cheese manufacturer, who died recently, was the originator of the "cherry in the cocktail," says The Champion of Fair Play. Marachino cherries at the time were a drug on the market with absolutely no sale. Last year there were upwards of five million of bottles sold in the United States alone. The originator had over a thousand cases of the cherries that he could not dispose of for four dollars a case to bakers and confectioners, the only ones that had any use for them. He put a cherry into a Manhattan cocktail which was being served to himself and his friend. Potter Palmer, the foremost hotel man in Chicago at the time, and the proprietor of the world famous Palmer House. And right there was born the cherry in the cocktail idea that is used now in every civilized country in the world. A week later cherries were worth fifteen dollars a case and following the lead of the Palmer House bar, were used in nearly every bar in Chicago. New York and other cities soon came in line, and in thirty days the fad had extended to the Pacific Coast. Like the mint julep, so dear to every southern, and other fancy drinks, the cocktail itself was not the invention of a professional mixologist but a customer who wanted a change from the regular run of drinks. 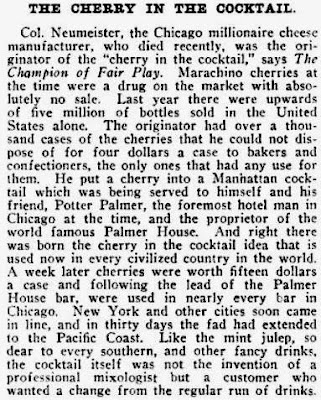 Posted by Boulder Libation at 3:44 PM