When an invitation to visit a local Brandy distiller on the outskirts of Bologna, Italy came up last week I almost did not go. Italian Brandy? Unheard of!

Then my friend assured me that this was the finest brandy in all of Italy...and then somehow my afternoon magically rearranged itself to allow this trip to be taken with ease...so why not I thought?

It turned out to be a highlight of our trip, and as for that bold claim? I now believe it to be one of the best brandies not only in Italy but even (queue the Jeremy Clarkson voice)...in the world. 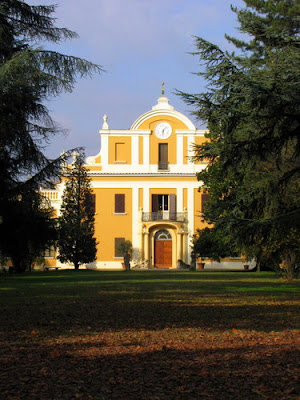 Located about 10 minutes outside of Bologna's town center in a compound dating back to 1578. The Villa was restructured in 1729 and thanks to some loving restorations over the years it looks much the same today as it did in the eighteenth century.

Guido Zarri's family has been working with brandy for three generations starting with his maternal grandfather Leonidas Zarri. They purchased the Pilla, a small company based in liquor Murano (Venice). 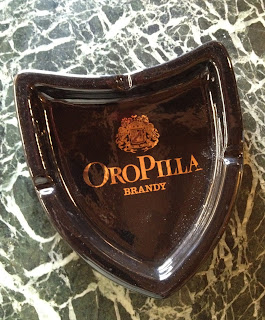 The company was later transferred to Castel Maggiore (Bologna) and under the guidance of his father, Guido made a very important development with the Brandy Oro Pilla. He went into business in the late 70's and sold the brand Oro Pilla to Amaro Montenegro in 1988.

In 1986 he started a small production of Brandy Cognac inspired by the goal of creating in Italy, a Brandy DOC. Keeping his small distillery in Villa Zarri, baptized by the name of the old house that lies in front of the distillery, he turned to craft production as a passion project to produce a Brandy which over the years has become increasingly valuable (and good!).

Starting only with fresh white wine made from the Trebbiano grapes grown in the local Toscano and Romagna regions, the Villa runs 24/7 during harvest season.

The aging process results in a net loss of approximately 3% of the total amount of liquid produced per year. After 10 years 30% of the original liquid has been lost to evaporation, a.k.a. the "Angel's Share".

So for every 7500 liters of wine they start with, to produce a 10 year old vintage they only net approx 450 liters of aged brandy. A 20-22 year vintage, only half of that. This is why good brandy is so expensive!

As each batch is distilled, the heads (the first part of the run) and tails (the end of the run) are saved in separate containers to be used later in proprietary ways to enrich the flavors of the final product. These containers are kept behind the steel fence in the photo above, and not accessible without the presence of the proper official, so at the wrong time of day even a small equipment failure can cause large disaster!

The aging process begins in (new) 350 liter barrels of French oak from the forests of Limousin and dell'Allier. When the brandy is aged in new oak for that first year, it absorbs color, tannins and aromas from the wood.

The origin of the oak makes a large difference. For example, the forests of the Limousin are predominately Farnia oak which have a coarser grain and are richer in content of phenol's like catechinic tannins. Oak from dell'Allier has finer veining and is rich in vanillin.

The Allier oak, with it's slower growth rate, has a fine, close grain which isolates the aging liquid from the outside environment to a greater degree than the relatively wide grains of the faster growing trees from Limousin. This is fine for wine but spirits need to breath more as they age than a wine does. This is why they use both woods, to get the best of both worlds.

When taking Bologna's idea microclimate for aging spirits into account, this access to the outside world becomes key. Bologna's gentle seasons provide just enough change in temperatures to really allow the spirit to take deep long breaths each year as the cold air contracts the liquid into itself and the hot season pushes it out.

After the first year it is racked into depleted barrels (which have been used for more than 4 years) and left there for the rest of the aging period. In the old barrels, through the pores of the wood and "breathe" of the seasons, the brandy loses alcohol, absorbs oxygen and develops its true flavors.

This phase is very slow. It takes a great many years to evolve and get a great Brandy distillate. Guido insists that his Brandy is totally natural and does not add coloring, flavoring or sweeteners. All Villa Zarri Brandies are aged a minimum of 10 years.

Today his oldest Brandy is a 22 year old vintage! Also bottled (Vintage 1988) is a Brandy flavored with tobacco leaves (Kentucky tobacco) from local Tuscan growers. (I was lucky enough to acquire bottle #967 of the limited run of 1400 bottles, and have included a review below.)

The range currently includes a 10 year, 18 year, 21 and 22 year releases as well as a range of (naturally) flavored brandies including a walnut liqueur, a cherry brandy and a coffee brandy. Especially well suited (and desirable) for cocktail mixing is the cherry brandy.

Their cherry brandy is made using both sour (durone della marca) and sweet (nero secondo) cherries which are steeped in the brandy for two full months creating an amazingly deep and rich cherry brandy (yet it is also somehow very light!) - with all natural ingredients. Simple and elegant it's perfect to sip on its own, but will lend itself well to classic cocktail recipes. This is truly how cherry brandy would also have been made "back in the day". 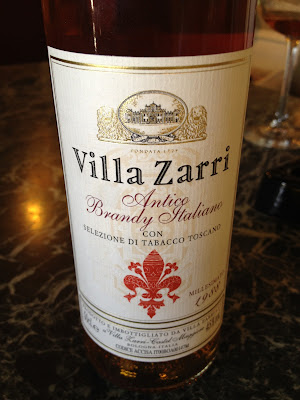 A cigar to drink? Created for those who want to enjoy their cigars with brandy to the next degree. It is bottled at full strength, without any dilution with water, after a long period of aging. It is based on a blend of brandies from 1987 and infused briefly with local Tuscan Tobacco leaves. (Kentucky)

The producer describes the expression as being "Clear and warm, refined with a bright amber color. Elegant and aromatic nose with a very fine smell of sweet spices, cinnamon, vanilla, grapevine flowers and cloves. On the palate this brandy is full, warm, spicy and fresh."

They also caution moderation as it does contains nicotine!

NOSE: Tobacco right there in the top, big and bold! Underneath though I found the notes of the cinnamon and vanilla, even a hint of the clove. This is a strong Brandy at 90 proof and that heat comes through on the nose, though not unpleasantly so - there is a softness there too for such a strong spirit. Full of character and inevitably met with a "wow!" and a quick second whiff. 23/25.

PALATE: Velvety. Smooth and slippery in the mouth. Several layers of flavor come on quickly. The deep, well-balanced brandy base arrives first with a nice big oak flavor and hints of leather. Subtle cherry and grape flavors make a brief appearance. The notes on the nose of cloves, cinnamon and vanilla show up mid way, giving way to the tobacco on the finish. 24/25

FINISH: The tannins are so soft as to be nearly absent, however they are present and provide excellent structure. A beautiful, long finish with full hits of fresh tobacco leaf along with further expansion of the baking spices present on the nose and palate. 24/25

BALANCE: Unique. Come on, a tobacco Brandy? I have no idea how they pulled it off - but even my own mother, who is a non-drinker and certainly not a smoker, enjoyed the overall effect of this spirit. She took a sip and closed her eyes as she was taken back to her paternal grandfather's tobacco farm which she visited often as a child. That's what a great spirit should do! The tobacco does not overwhelm, it's big and forceful while remaining subtle at the same time. As charming as it is unique. Considering the task they undertook with this ambitious mix, I'd say the product us a huge success and deserves the highest of marks.  25/25

Posted by Boulder Libation at 3:47 PM